ESTE is a decision support system for crisis staffs, at the level of nuclear facility or at the national level, in case of nuclear and radiological accident. The system predicts the source term (release of radioactive substances endangering inhabitants and the environment in case of nuclear or radiological accident), calculates movement of airborne radioactivity in the environment (from the location of release) and radiological impacts to the inhabitants.
The outputs and results of the ESTE systems are appropriate source of information for the crisis centers of nuclear power plants, national and international commissions of nuclear and radiation safety and moreover for the Integrated Rescue System (e.g. Fire Rescue Service), the suggested protective measures can help to protect inhabitants and reduce impacts in agriculture. Multiunit (more then 1 reactor at the site) source terms and multiunit impacts are modeled by ESTE in parallel, at the same time.

ESTE systems are connected online to technological and radiological data from reactor, primary circuit, secondary circuit, continement and from ventilation stack, to early warning system data (EWS, dose rates measured at site and across the country). The systems are connected online to meteorological data and numerical weather prediction for the locality of the nuclear facility.

The main task of ESTE is to calculate radiological impacts (especially projected and averted doses) and to model dispersion of projected or really observed release of airborne radioactivity in the environment. The situation is evaluated according to the scale standard scale used at the nuclear facility (initiating event - level 1/2/3) and according to the international nuclear event scale - INES. Dispersion of radioactive gases and aerosols in the atmosphere is modeled by PTM method (Puff Trajectory Model) and by LPM method (Lagrangean Particle Model).

The main output of ESTE systems important for crisis staffs are suggested urgent measures protecting the inhabitants in the emergency planning zone of the nuclear facility. 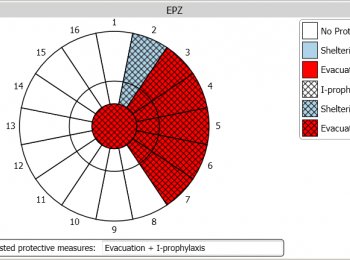 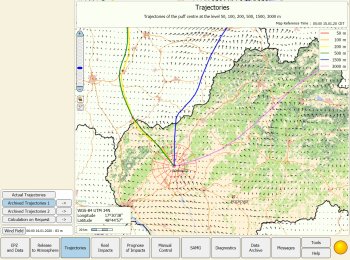 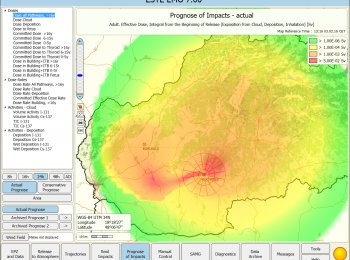